When it comes to statistics, Zillow, the real estate directory site has listings in practically every city in the country, and it’s been issuing reports on the state of the real estate market.

Their last report was issued in February. That Real Estate Market Report reaffirmed what many have noted on the real estate scene: the continuing success of rental investments and the furthering decline of home values.

According to the Zillow report, median rents rose 2 percent from February 2011 to February 2012. But during the same period, home values fell 4.5 percent.

The reported drop in home values coupled with the rising rents shows how prevalent the shift has been away from homeownership and towards renting. This shift has stayed on the national level for years now.

Zillow uses their own algorithm to create their zestimate of values, and it’s often come under criticism. But their market reports use loan equity data and foreclosure transactions that are obtained from public records, so they’re more reliable than zestimates. 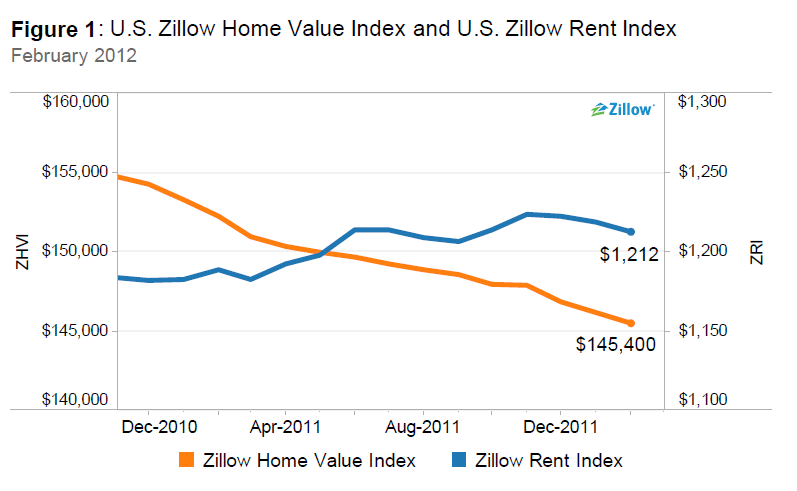 The unfortunate case of hundreds of thousands of foreclosures nationwide are a main contributor to the depressed home prices. This will probably not get any better soon, as the majority of foreclosures will only start getting processed this year by the banks.

Zillow Senior Economist Svenja Gudell said “rental market(s) remain a bright spot in the housing market….Converting distressed and vacant properties into rental units will reduce the oversupply of homes and speed up the recovery process.” That’s a positive side effect to investing in rental units, one that the entire country can appreciate.

Although Zillow uses aggregate data for their conclusions, local markets have plenty of room to fluctuate. So in some places, the opposite effects could be taking place: we could see rents dropping and housing prices rise.

So tell us, what have you seen happen to your local real estate market? Are rents rising and home prices falling? Or is it the opposite for you? Tell us in the comments below. Data-driven research is fancy, but there’s nothing more powerful than eyewitness accounts straight from the ground.