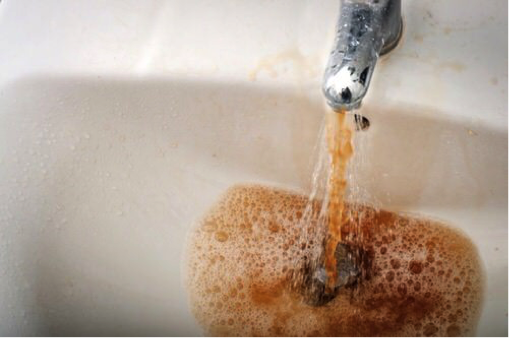 As a landlord or property owner; it’s your responsibility to ensure that everything in your property is operating smoothly. One of the most important parts of any house is the plumbing system — particularly the water lines. Some house owner’s often forget to have their pipes renewed.

Failure to replace an aging or damaged pipe will lead to leaky pipelines or worse: flooding from a busted water line. Apart from having a licensed plumber to examine the condition of the pipes. You should also be mindful of the signs of a broken or old water line.  Here is a list of 5 signs of a damaged water line.

Water coming out from the taps is brown or discolored

There are times in which the water coming out of your taps or other plumbing fixtures is discolored. But this shouldn’t raise an alarm quite yet. You see, there are occasions when rusty water is dispersed due to ongoing work with the municipal water pipe connections or you just turned off your main water supply for a long time (especially during a long vacation). Additionally, if you have well water, it may just be a sign that a filter needs to be changed.

However, it’s a different story if your plumbing fixtures are constantly delivering discolored water since this indicates the pipeline is too degraded and corroded. There are other reasons why discoloration is happening such as mineral blockage and soil entry into the water line.

The water pressure is getting weaker

A weakened water pressure can be a sign of a broken pipeline. Pinholes or small leakages on the pipes sap out water continuously —causing low water movement. Of course, this isn’t the only cause of a weak water pressure. Your local water supplier might have lowered the water pressure due to connection issues. Blockage in the pipeline is also another possibility. Get a plumber to evaluate the water line to confirm what’s truly causing the low water pressure.

Clogs have become a common occurrence

Blockages in the pipe can happen due to mineral and debris deposits. Unclogging the clogs in the fixtures isn’t necessarily difficult. You do need to be alert if the clogs are becoming too frequent. The water line may have collapsed and became the cause of the clog itself. Extreme corrosion in the pipe lining can cause blockages in the water line pathway. The worst thing that could happen is when the water pipes give in and bursts — causing a flood in the house.

Deterioration due to aging

All types of pipes will eventually age and become unusable. Of course, some types of pipes have longer lifespans than others. Nonetheless, all pipe materials will become older and degenerate. You should be familiar with what kind of pipes are used for your water system and how long do they usually last. Generally, you need to have an annual examination of the water line pipes if its past 50 years of usage.

Moist spots on areas that shouldn’t have moisture in the first place is a major sign of a water leak happening nearby. And as you already know; leaks come from a broken pipeline. You must be mindful of mould growth since they can also indicate water leakage. It’s possible that the leaks may not be coming from a water line but the sewage system. You can easily distinguish a sewer line leak due to its horrid odour.

The best property managers know how to provide exemplary service to all tenants, regardless of special circumstances. With senior housing on the rise, and an aging Baby Boomer population turning to rentals, property managers should be well-versed in the laws regarding housing for people with disabilities. The Americans with Disabilities Act (ADA) became the law of the land in 1990. The ADA is an...

Hiring contractors is one of the many tasks assigned to landlords or property managers. These contractors can be plumbers, roofers, carpet cleaners, or electricians. Each one of these contractor’s professions provides a vital service that contributes to the proper management and maintenance of your property investments. As you know these contractors are needed, but more importantly, you need to...

Investigating property maintenance companies is something every landlord and property manager has to deal with at one point or another. Unless you’re large enough that you have an in-house crew, you’ll need to call on the experts to help with both minor and major issues now and again. But some people- especially DIY landlords- are reluctant to make the investment. They don’t see...